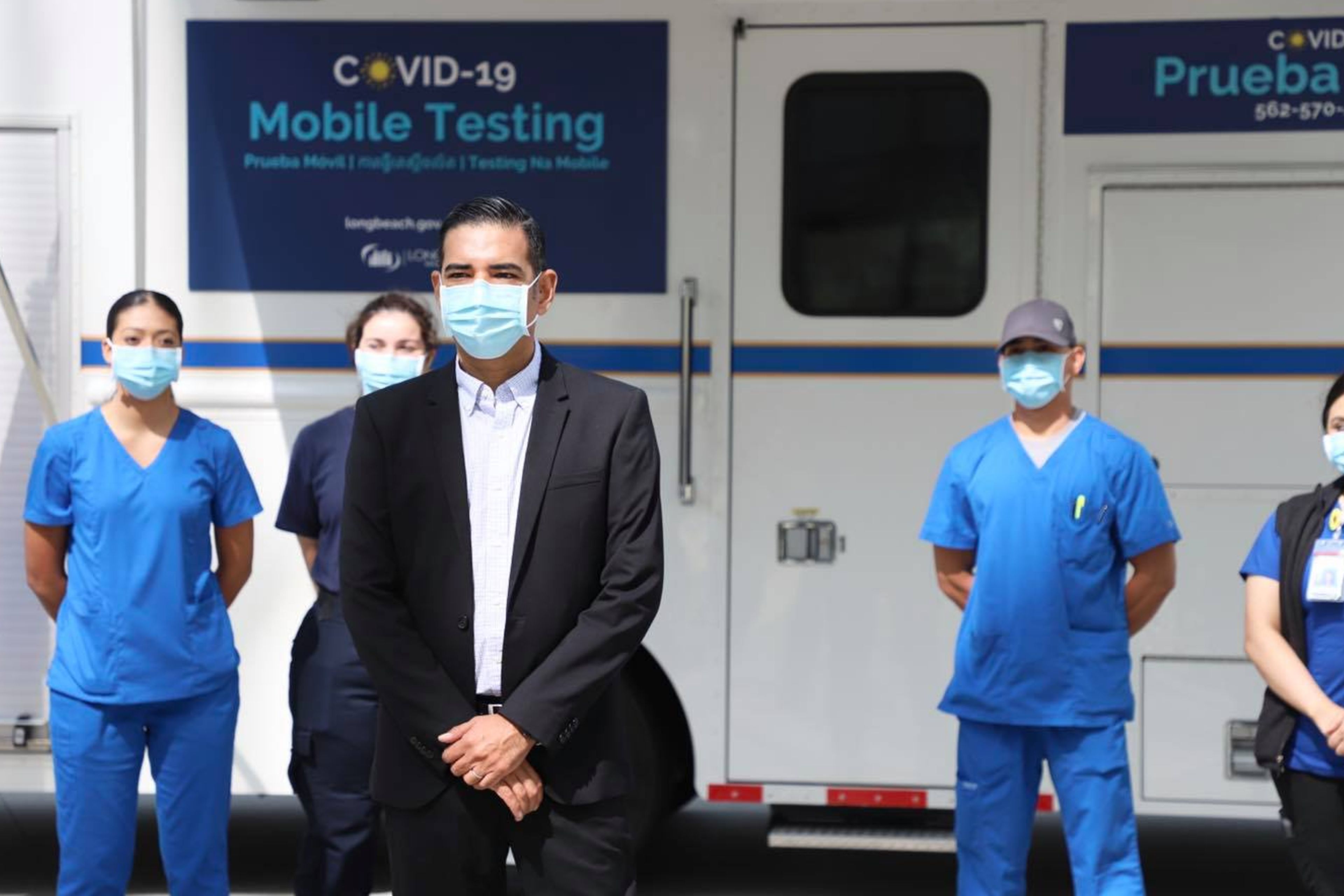 Mayor Robert Garcia has been a nationwide leader in the fight against COVID-19. He has been recognized by the White House and Governor Newsom for his efforts to protect local communities from the virus, and to reopen the local economy safely. Mayor Garcia established a robust testing and contact tracing program, brought together health experts to implement science-based COVID-19 protocols, and was the first in the state to begin vaccinating educators, people with disabilities and frontline workers. Mayor Garcia worked with the local community and business leaders to reopen Community Hospital of Long Beach and bring hospital services to the East side of the city.

The Mayor has also worked to lower sexually transmitted disease infection rates, implementing plans that would significantly reduce infections including HIV citywide. Mayor Garcia, a supporter of Medicare for All, is also the co-chair of Mayors 4 Medicare.

Mayor Garcia believes housing is a human right. He has worked tirelessly to establish nearly 13,000 new housing units across the city for families of all income levels.

When the COVID-19 pandemic hit, Mayor Garcia quickly put a moratorium on evictions and provided tens of millions of dollars in rental assistance relief to families in need. He has worked to decrease the number of people experiencing homelessness by supporting affordable and inclusionary housing policies, streamlining development, implementing new transitional and permanent housing initiatives such as Project Homekey and Roomkey, and updating zoning to build new housing.

In 2018 Mayor Garcia launched the Everyone Home Long Beach Taskforce, a strategic working group that has led to the opening of Long Beach’s first year-round shelter and the development of the SAFE Parking Program.

Mayor Garcia believes strongly in building an economy that supports and works for everyone. Mayor Garcia led the nation in releasing a local COVID-19 recovery plan in partnership with the Biden Administration. The Long Beach Recovery Act uses federal, state and county funds to support the community’s health and safety programs, and secure the city’s financial future.

At the start of the COVID-19 pandemic, Mayor Garcia created a historic economic relief package that ensured workers had access to paid sick time, and small businesses had access to loans and grants. During the pandemic, Long Beach also became the first city in California to provide an extra $4 an hour of Hero Pay to grocery workers. Long Beach is also launching a guaranteed income pilot program, providing 500 single parents living in poverty and struggling to meet basic needs with $500 a month.

In 2016, Mayor Garcia led Long Beach in raising the minimum wage to $15 an hour, ahead of the state. Additionally, the Mayor worked to attract new and diverse businesses to Long Beach including the development of the 2nd and PCH project and the expansion of Douglas Park. Mayor Garcia has led efforts to grow the local space economy, now home to one of the largest aerospace and space technology economies in the United States.

Mayor Garcia is a strong supporter of organized labor. He has supported the organization of dock and port laborers, the unionization of hotel and cannabis workers and has fought against attempts in the city to contract out city union work. Mayor Garcia also worked to implement the first citywide Project Labor Agreement (PLA) in the state, helping to promote opportunities for local-hire on capital construction projects.

Mayor Garcia worked with the City of Los Angeles to secure Long Beach as a venue for the 2028 Olympics.

Long Beach is safer today than it has been in decades. Homicides are at historic lows and critical investments have been made in public safety. Fire and paramedic response times have decreased under Mayor Garcia and and body-worn cameras have been implemented across public safety departments.

With the nationwide increase in gun violence, Mayor Garcia led the creation of a Safety Recovery Plan to ensure resources are available to build community trust, develop economic opportunities, support the city’s youth and combat crime. Mayor Garcia has also worked to rebuild the Long Beach Police Academy headquarters and numerous fire stations across the city.

Mayor Garcia leads the nation’s second-largest container port: the Port of Long Beach. During his tenure, he made the Port of Long Beach one of America's most sustainable and efficient seaports in the country – and in May 2021 the port saw its busiest month ever, moving more than 900,000 cargo containers for the first time in its 110-year history.

Mayor Garcia has represented Long Beach and the United State across the world, having visited 15 countries to establish and expand trade relationships in Japan, South Korea, China, Taiwan, Singapore, Cambodia, Vietnam, Chile, Denmark, Peru, Switzerland and Germany. He has also visited Peru and Honduras in partnership with the State Department on missions to expand LGBTQ+ rights worldwide. The Mayor has also been to Israel and the West Bank, through a partnership with the Jewish Federation.

Mayor Garcia spearheaded the passage of Measure A, the largest infrastructure investment plan in a generation. Since its passage, it has rebuilt streets and sidewalks, parks, libraries, and water infrastructure. In 2020, voters passed an extension of Measure A.

Mayor Garcia also spearheaded investments in the city's light rail system and worked with LA Metro to clean and speed up the A Line, which connects Long Beach to Downtown Los Angeles. He has been an advocate of Complete Streets and multi-modal transit and has overseen the implementation of the city’s bike share program.

The Mayor helped bring major investments to the city’s air and sea ports with the modernization and improvement of the Long Beach Airport passenger terminal and the completion of the Long Beach International Gateway Bridge, the largest bridge project in California.

Mayor Garcia has made Long Beach a leader on climate action. The Mayor has led efforts to ban Styrofoam, plastic straws, and plastic bags — all ahead of the State of California. And Long Beach is home to one of the most sustainable ports in the country that boasts an aggressive Clean Air Action Plan. In 2015, Mayor Garcia joined the Global Covenant of Mayors to reduce greenhouse gas emissions and enhance resilience to climate change around the world. And in 2021, Mayor Garcia signed the No Fossil Fuel Money pledge.

Long Beach has been a leader on renewable energy. Through the Mayor’s leadership, the city is transitioning the municipal fleet to all-electric vehicles, launching a major solar energy initiative, and ensuring the newly completed Civic Center was built to LEED Gold standards. The city has replaced all city streetlights with LED lights, launched a substantial tree planting program, adopted its first-ever Climate Action and Adaptation Plan (CAAP) and a Sustainability Plan for the Long Beach Airport.

Since Mayor Garcia’s first election to public office in Long Beach, he has been committed to making the city a leader in digital infrastructure and innovation. As a member of the City Council, he championed the creation of the Go Long Beach mobile application, making Long Beach the first city in California to offer a city-wide improvement and cleanliness reporting system.

In his first 100 days as Mayor, he spearheaded the creation of the City’s Technology and Innovation Department. Since then, the Mayor has overseen the introduction and expansion of Wi-Fi at city-run parks, revamped the city website and social media programs, and modernized technology resources offered to residents including making book rentals more accessible through eBook options, and providing mobile hotspots and laptops for rent at Long Beach public libraries. For small businesses, Mayor Garcia was integral in the launch of BizCare, an effort targeted to help small businesses located in low-to-moderate income areas benefit from small business grants, loans, technical assistance and other resources.

In partnership with U.S. Department of Health and Human Services, Long Beach hosted an emergency shelter for migrant children. The Long Beach Convention Center was converted into a temporary shelter resulting in over 1,500 children being unified with family or long-term sponsors in the U.S. Through the Mayor’s leadership, the community donated over 130,000 books and toys to the migrant children.

Mayor Garcia worked to establish the Justice Fund in Long Beach to provide legal support for families facing deportation. Long Beach also became a Sanctuary City and has provided sanctuary protections for undocumented residents. Since taking office, Mayor Garcia has prioritized language access and putting women and residents from historically underrepresented communities in more leadership positions. For the first time in Long Beach history, more women than men serve in leadership on commissions and boards in the city.

A strong supporter of the LGBTQ+ community, Mayor Garcia has also strengthened protections for the LGBTQ+ community by establishing trans-inclusive health care coverage in the city, increased access to STD checks and treatments, and facilitated a more welcoming community citywide. Long Beach has received a perfect score from the Human Rights Campaign for inclusive cities every year Garcia has served as Mayor.